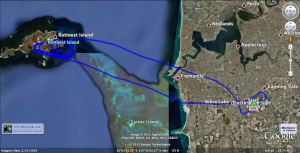 Ok, I’m that far behind in my blog posts, its time to bring them upto date quickly.  Will quickly cover off the Rotto cross winds.  There is some good video footage of the landings at Rotto, but that will have to wait for now.

Some time back I did my crosswind briefing and we did them at Jandakot.  However for whatever reason Adam hadn’t signed me off for them.  This meant we had to head up and do cross wind landings and get the big tick.  Rotto was the choice.  With 14-16 knot cross winds at 90 degrees to the runway, it was the perfect spot.

This was the first time to depart Jandakot other than to the training area.  So there were a few new things to learn.  Firstly, exiting the circuit towards “Murdoch Open Space”, the climb points and so forth.  Actually it was all pretty easy.  Once out of Murdoch open space you line up for mid-Fremantle Harbour so you track over Fremantle Golf Course.  This is where we swapped out to Perth Radar frequency.

“Perth Radar, India Golf Xray, Fremantle Golf course 1500 tracking to Rottnest, request traffic”.  The lovely lady on Perth Radar this morning provides the traffic and we continue on our merry way, trying to spot the other aircraft on route.  It is a great view along the cost and over to Rottnest, I can’t wait to get my PPL and be able to do more of this!

On arrival to Rotto, we overflew to check circuit direction etc.  We opted for the standard runway 27, but either direction was fine due to the cross wind.  Adam said he’d do the first touch and go to re-cover the steps and to show me what happens as you approach the Jandakot airstrip…

Crabbing in is normal, basically the nose of the plane into the wind somewhat to compensate for the crosswind. What suprised me was the angle at which we had to crab to get in.  All good and smooth, so I’m under the impression that this is going to be easy.  Then you get down just above the small hills on the southern side of the airfield, it all goes bad.  There is huge amounts of turbulence and instability!  We are all over the place.  The runway keeps approaching and in the final moments using the rudder we straighten.  At the same time Adam lowers the left wing into the wind to get us down, mainly to touch on the left wheel first.  We are all over the place and have a degree of sideways drift.

On touchdown, it is the left wheel first, then the right and nose in unison.  The scary part was the amount of sideways drift we have on the surface of the runway.  Quick to remove the flaps and turn the Ailerons into the wind to keep it safe, Adam continues to just hold control.  We continue to slide sideways on the surface until full power is restored and we pull up again.  As soon as the wheels break the surface, the wind pushes us off the side of the runway.  The turbulence off the hills is equally as bad on climb until we make about 150 feet.

Well since I had the choice, the answer was of course yes 🙂  My next question to Adam, “Are you scared? I’ll will be me now???”.  That is the great thing about dual control planes, we can both hold the controls and Adam can render any assistance he feels necessary to preserve his own existence.

Long strong short, I did two touch and go’s and two go arounds.  It was a boat load of fun, the adrenaline was awesome and it will make cross-winds at Jandakot seem easy.  We had one close call, an aircraft arrived directly in on finals without making appropriate calls.  We had clearly called we were on downwind and coming in, he entered directly in front of us as we were on base about to turn final.  Not only were his radio calls shit, so was his attempt at landing.  He was way off the centre line coming in and did the right thing, that is go around.  He didn’t stay for another try and headed off.  Another aircraft arrived a little later to have a go too.

He was at 6 miles out when we were turning base.  He was that quick, he caught us after we’d touch and gone.   He aborted his landing due to the cross winds and opted to do a 500 foot orbit of the island instead.   At this stage we turned for Jandakot and headed home.

The lesson was fun, the adrenaline good and my cross wind skills a bit better.  So all round good fun.  Adam signed me off for cross winds after this trip, so that means next it is time to be signed off Practice Forced Landings!

This entry was posted in Uncategorized. Bookmark the permalink.