One thing about voice messages is that when you get a few and they’ve bank up, it takes for ever to listen to them all, worse still, you have to go through them in order of when they were received.  Having missed a call from BigKev, the message said it was number 12 in the list.  It had to wait…

It was now Saturday morning and I had built the courage to tackle the now 15 voice messages.  Finally at number 12, BigKev’s message “5 Mooneys, formation practice, wheels up at 4 Saturday arvo, front seat for you”.  Now feeling slightly bad that my procrastination to check the messages meant I had not returned this or a number of calls already.  Straight onto the phone to BigKev, the seat was confirmed.  Although I’d heard the message wrong and it was instead Sunday arvo.  Sweet!

Having flown my Non-Circuit practice flight earlier on the Sunday morning, I’d arrived at Jandakot a little early.  The goal was to get some good photos today, so dusting off my Canon 70-200m IS-F 2.8 lens and the 40D.  Standing outside I worked on getting a few practice shots in.  BigKev brought along his sweet 7D with a wide lens.

By the time we had briefed, we were down to 4 planes.  It was BigKev, Rohan, Andrew and Jake as the four pilots.  The plan was to depart via Freo Golf Course, up the coast to City Beach, then out over the ocean for some 15 to 30 degree turns.  BigKev was formation leader, the others in a diamond behind.  We went through a number of turns before changing positions and leads.  On the way in, we held back and snapped a few shots.

All round, great fun and once again thanks BigKev!

Mooney Formation - Echelon Left with Perth city in the background 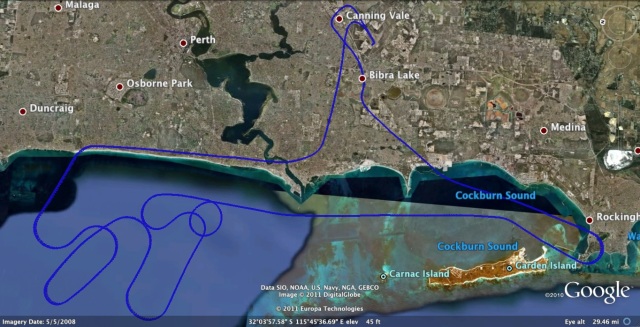 This entry was posted in Formation, Jandakot. Bookmark the permalink.

8 Responses to Mooney Formation with 4 Planes