Adam and I pretending all was good

Once upon a time, there was this  student pilot.  He was brimming with confident, had a strut in his step and swaggered as he wandered the streets.  His amazing skills included finenessing the aircraft into the air, flying military grade circuits, wowing his willing  passengers with scenic trips and landings so greasy, McDonalds would be jealous.  Life could not be better for this fellow.  With the mere formality of a few cross-country navigation flights, he would be qualified to fly anywhere in Australia.  Of course, that was until they day his iPad was taken away and he commenced his Flight Navigation training…

Navigation training is simple, think again!  The real story goes something like this…

Its been a good while now, the US trip is but a distant memory, the last shuttle has taken off and landed (will get around to writing about that soon) and work is dominating one’s time yet again.  Having carted my navigation training books half way around the world and back, they didn’t get opened once.  Now back it was time to get on with it.

The first step was to do the 3 mandatory briefings with Adam and go through what was to be the foundation theory for the navigation flights.  That was a shock to say the least.  It involved:

Apart from all that, it was rather straight forward.  A note to those yet to do the theory, please don’t leave it till 7pm on a Sunday night to do your lessons.

The briefings took about 3 hours all up and gave a high level overview.  They felt a bit rushed and we pretty much just ripped through each area.  To go with that, the training material is not that flash, it reads like it was the last few chapters somebody had to write before being released from prison.  It could just be me being a dumb ass.  Anyway, one big tip.  Search YouTube, there are some brilliant videos on pretty much everything you need to learn.

The poor weather which negated about 3 flight attempts was a god send in the end.  It meant more time to familiarise myself with the navigation material.

For the first navigation flight, I was given the details of the route we were to fly well in advance.  It was Jandakot (YPJT) with a Yangebup and Lake Thomson (LTOM) departure.  From Lake Thomson we would climb out and down to Bunbury (YBUN).  Once in Bunbury we would join the circuit rom overhead and do a few touch and go’s.  Then depart Bunbury to Boddington (BODD) turning North West ish to Byford (BYF) and then back to Jandakot via Six South (SIXS).

First step we drew out the flight plan on the VNC.  This is the map that has the best scale for the entire flight.  Then transfer than on the VTC which has more detail closer to Perth.  Then also draw it out on the WAC, which basically covers the southern area of WA south of Perth.  Once the maps were done, the main details were written out on the flight plan.  With weather needing to be applied, I practiced a few times in the lead up with the conditions at the time.  It was worth while as it meant having to use the manual E6B flight computer to re-enforce that skill…

So on the morning the routine with the weather captured and printed from NAIPS, the flight plan updated, map 10 minute markers drawn, flight plan submitted to Air Services and about 10 other things, it was time to head off.  But not before the plane is checked over and we get ourselves setup in the cockpit… 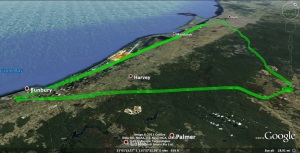 The only way I can summarise what it is like to non flyers is something like this.  Imagine you have hand written directions, 3 maps at different scales, a bunch of primitive geometry tools, a pencil, an eraser, your talking hands free on your iPhone, dialng different random people at different points on your journey, driving your car on a bumpy road at 250 kmh, you driving instructor trying to give you tips (but you can’t hear him as his microphone is rooted), your trying to find the correct turn off, writing the time you past the last intersection down, measure the distance from the town in the distance, perform some geometry based mental arithmetic, noting down your current fuel and make sure you engine isn’t overheating. But thats not before you re-calculate your ETA because your speedo isn’t reading correctly and you need to phone ahead and let them know when you’ll arrive within a 2 minute tolerance.  Thats all before you instructor rips on the handbrake and tells you to safely park in-between the trees off the side road with a power pole in the way.  Well something like that anyway… 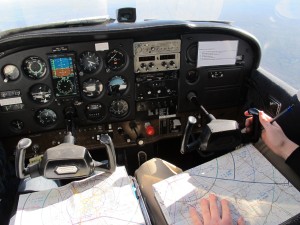 We’ll save the flying version till another time.  The flight was good putting into practice all of the things we covered on the ground and then some.  The visual navigation I seemed to do ok.  We added a small deviation before Boddington so we could practice a “1 in 60 rule” navigation correction.  I was surprised how well it worked.  Basically it is a way to mentally calculate how to bet back on track when you have deviated from your course.

Just before Boddington, Adam ripped on the handbrake.  Well the flying equivalent of simulating an engine failure.  With little to land on besides a cattle filled paddock on the side of a hill with power lines running through it, all was good.  You can see these on the flight track above.

All in all, it was a good experience.  The key lessons:

The only real unfortunate thing of the flight was that Adam’s microphone in his headset actually bit the big one about 5 minutes after leaving.  It meant that we had very limited in flight communications and that made it considerably more difficult.  It meant the lesson felt like it was half solo and there were many things I would have asked which I couldn’t.  Oh well, Bunbury Traffic will wonder who the clown in C172 India Golf Yankee was that Saturday morning!  The positive is that Adam is now the proud owner of a set of Lightspeed Zulu’s.  Or is he…

Now I just can’t wait for the next nav lesson 🙂